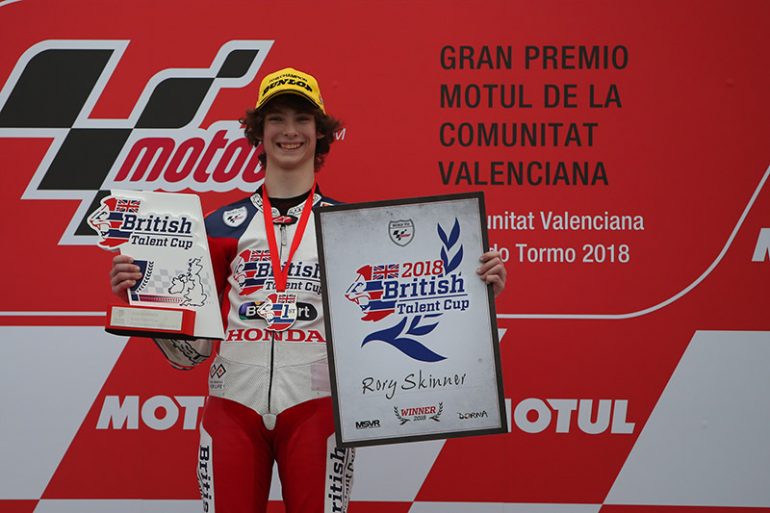 Scottish motorcycle racer Rory Skinner became the first ever winner of the British Talent Cup championship after taking a brace of podium finishes in Valencia, Spain, this weekend.

The 17-year-old from Perth rode a mature race to finish second in Friday’s treacherous wet conditions, which saw just 10 riders finish the race, before completing the job with a stunning ride in Saturday’s dry finale. The former Aprilia Superteen champion and Red Bull MotoGP Rookies Cup race winner had needed just 14thplace to secure the title, but rather than ride cautiously for the points, Skinner fought a race long battle with Thomas Strudwick out front, as title rival Max Cook kept the pressure on in the battle for third.

Rory pulled off some stunning overtakes and led out of the final corner as they dragged to the line for the 17thand final time, however Strudwick was able to slipstream Rory and deny him a winning end to the season by just 0.015 seconds. Despite missing the win, Rory was understandably delighted as his 20 point haul saw him lift the championship title, 27 points ahead of Strudwick who was, in turn, a further point ahead of Cook. Between them, the trio won all 10 of the 2018 British Talent Cup races – Rory winning four and his rivals taking three each.

“At the start of year it looked like I might not have a ride at all this year, so I have to say a massive thank you to everyone at Dorna and the British Talent Cup for the opportunity this season,” said Rory. “All year Dani Ribalta and Alberto Puig have been coaching us on every aspect of racing, which has been very helpful.

“In the race today I just rode how I usually ride, because that’s what had gotten me to this position in the championship. Sure, I was a little bit nervous at the start but halfway through the race it had worn off and I got on with the job. I knew that I could be up the front with Thomas and I knew that he had good pace. I tried to hold him off but unfortunately he pipped me to the line. It was the championship that mattered though, and I am delighted to be to first ever British Talent Cup champion.”