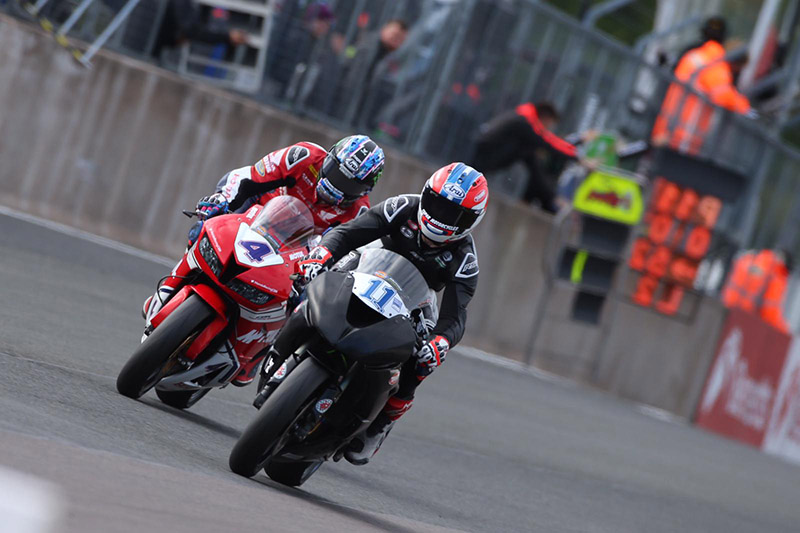 Rory Skinner scored a fine ninth placed finish in the 12-lap Sprint race at today’s second round of the Dickies British Supersport Championship at Cheshire’s Oulton Park, despite making a late change of bike to the Superstock 600 machine he rode in 2018.

With development of the new-for-2019 636cc Kawasaki ZX-6R ongoing, Rory and Team MSR made an 11th hour decision to revert to their superstock-spec, 2009-model, ZX-6R for the second round.

Despite giving up over 20bhp to the supersport-spec machines on the grid, the 17-year-old British Talent Cup champion qualified as the 12th supersport rider on the combined Supersport/GP2 grid and made a good start to make up several places on the opening laps. With lap times half a second quicker than in qualifying, the Perth-based rider was able to run inside the class top 10 and enjoyed a good battle with Ian Hutchinson. Rory was eventually able to pass and pull away from the Isle of Man TT legend in only his second meeting at supersport level.

“I’m happy with that,” Rory said after the race. “We still have some work to do in developing the new 636, so we made the decision to bring out the old 600 this weekend. We’re quite a bit down on power but I knew from my lap times in last year’s Superstock 600 race that we should have been able to get in the points, so to get inside the top 10 is a great result. I had a good battle with Hutchy and rode as hard as I could for the whole 12-laps. I’m happy with the way I am riding and if we can have more of the same tomorrow, we’ll have had a really positive weekend.”

Rory’s best lap time from the Sprint race sees him move up to 11th in the supersport category for tomorrow’s 16-lap feature race, which will be broadcast live on British Eurosport 2.