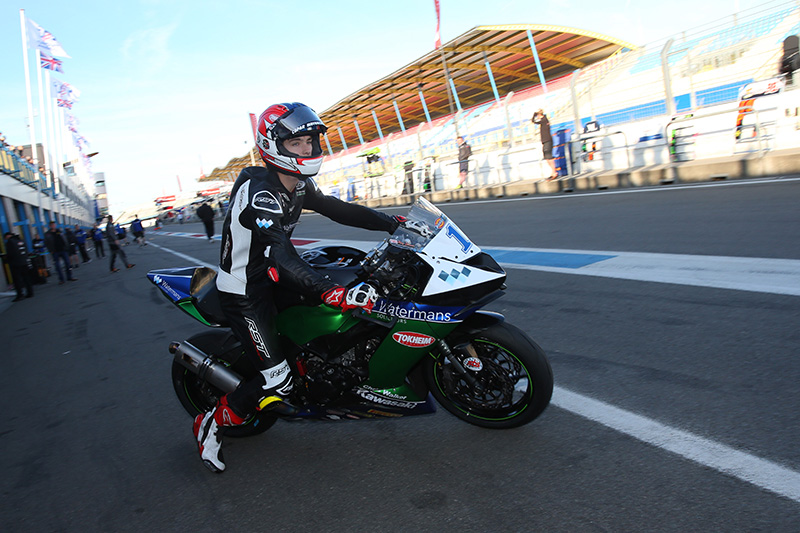 The 2019 Dickies British Supersport Championship ends at Kent’s Brands Hatch Grand Prix circuit this weekend, with Rory Skinner and his Watermans Team MSR outfit looking to end the season on a high.

The small privateer team was only formed in February and has often learned the difficult way in the ultra-competitive British championship series, but they were rewarded for their perseverance last time out with a hard fought podium finish at Donington Park.

Eighteen-year-old Skinner was in sensational form at the Leicestershire circuit, following up his pair of fourth places in Assen with a front row start and third place in Sunday’s Feature race.

This weekend will be the championship’s second visit to the famous Brands Hatch venue. June’s outing was one of the team’s most challenging of the year, with a gearbox issue on the second lap of the Sprint race not only causing the 2018 British Talent Cup champion to retire with no points, but also to start the Feature race from the back of the grid. In the circumstances, Skinner did a great job to charge through to ninth at the finish – running lap times comparable to many riders finishing in front of him.

That race was exactly four months ago and a great deal has happened since then. Not only have the team developed their Chris Walker Kawasaki supplied ZX-6R, running different suspension and a more powerful evolution of the 636cc engine, but Skinner has grown in stature as a supersport rider.

Switching from a 47bhp/84kg Moto3 machine to a 140bhp/162kg supersport bike for his first season in the senior ranks, the Perthshire rider has developed step-by-step and currently lies seventh overall in the championship, being top Kawasaki rider and leading rookie in the class.

“I was so happy to finally get on the podium last time out,” said Rory. “We’ve been close on a few occasions but a few problems and bad luck had denied us until Donington.

“I feel like I am understanding the 600 more and more, every time I get out on it. This year was never going to be about winning, but about learning the class and putting myself in the best possible shape for 2020. Pretty much everything about this year was new to us. The bike, the tracks, the other riders, the championship… everything has been a learning experience to us, and we’ve had to learn how to run our own team too.

“Brands Hatch is a fun circuit to ride, although the weather can be unpredictable at this time of year and there’s a good chance that it will be cold and wet this weekend. Another podium would be brilliant and hopefully we can consolidate seventh in the championship, but really I’m just looking to get the best possible results we can and to end the season on a high.”

Timings for this weekend’s races are slightly earlier than usual, with Saturday’s 12-lap Sprint race scheduled for 16:45 and Sunday’s 18-lap Feature race taking place at 15:10. Both races will be shown live on British Eurosport 2.